Isabell Werth: That is why it is much more difficult for aspiring young dressage riders, compared to show-jumpers

The Aachen Dressage Youngstars began yesterday, an international dressage show for aspiring young riders. Also on board: Participants of the current CHIO Aachen CAMPUS Programme of Excellence, who are trained by the Head Coach, Isabell Werth. We spoke with the most successful rider in the world about the difficulties young riders encounter during the transition over to the adult circuit.

Question: What is the situation in Germany regarding aspiring young dressage talents?

Isabell Werth: We have some very good horse and rider combinations. The decisive factor is how well they can also be integrated into senior-level sport. For example, in the scope of U25 competitions and the Piaffe Prize, we can make sure the riders are well-prepared, but the decisive stage is introducing them to the adult circuit in the next step.

Question: To achieve this, in addition to a top horse, a lot of other things are essential…

Werth: That is true. And it is one thing to have the right horse – but it is something completely different also training this horse for top sport.

Question: Is that what makes it so difficult for the young riders to move up to adult level? That it simply doesn’t suffice to “just” be good at riding?

Werth: That’s right. And that is what makes it much more difficult in dressage compared to jumping. A talented jumping horse that has made it at Young Rider level, also tends to have the scope to succeed in jumping higher and further later on. That is different in dressage: The young rider first of all has to learn how to do piaffe and passage with its horse – this is a huge step. The gap is simply much wider in dressage than in jumping.

Question: And what does the best and most successful rider in the world suggest here?

Werth: I haven’t got a solution, I merely always point out the fact that it doesn’t suffice just learning how to execute the exercises, it is training the horse that is the be all and end all.

Question: What happened in your case back then?

Werth: I was extremely lucky at the age of 17 to be coached by Dr. Schulten-Baumer, who was always only interested in the Grand Prix, he exclusively occupied himself with training young horses for the Grand Prix sport. For him it wasn’t important whether I took part in the Young Riders Tour on the way to this goal, or not. Here’s a brief example: Gigolo was seven at the time and could definitely have competed in the Young Riders Tour, but Dr. Schulten-Baumer said straightaway: We are going to get him ready for the Grand Prix level. Because it is mostly too late if you start preparing yourself for U25 and the Grand Prix sport with a ten or eleven-year-old horse.

Question: So, a young athlete also always has to be a trainer?

Werth: Exactly. Ideally aspiring young riders have an experienced horse for the Junior and Young Rider Tour to gain experience and become well-versed in the exercises and learn how everything works. Parallel to this they should be schooling on a young, talented horse for the Grand Prix.

Question: In spite of these challenges, Germany is THE dressage nation. How does it manage to achieve this again and again?

Werth: Because the infrastructure is outstanding here – from the breeding through to the training. There are strong combinations, but it has also been the same names for many years, who have internalised the training principle – Dorothee Schneider has been on the scene for years, so have the Rothenberger family, Theodorescu, Linsenhoff, Capellmann/ Lütkemeier. And when someone joins the ranks, like Jessica von Bredow-Werndl and Benjamin Werndl, then it is the result of long, hard work and training. Helen Langehanenberg is also a good example. She achieved her success after following a long and consistent path through training and by working as a professional groom. The joy that continually introducing horses to the sport and training them brings and conveying this fun to young people was incidentally also decisive for me taking on this role at the CHIO Aachen CAMPUS.

Question: As Head Coach Dressage of the Programme of Excellence you are currently also passing this credo on to this year’s candidates. How are the young riders getting on?

Werth: We have just reached the half-way mark of the Programme of Excellence. It is a very famous, international mixture of athletes at the highest level. One or two of them intend and will definitely be able to take up riding professionally and who have quite clearly set this as their goal. Others haven’t set this as their main goal, but are nevertheless extremely committed to the sport and are at a great level. Then, there are others, who are on the threshold of making a decision: Shall I become a professional rider or start an apprenticeship after school. Exciting.

Question: The Programme of Excellence of the CHIO Aachen CAMPUS not only supports the participants in sporting aspects.

Werth: There are so many areas that ultimately determine whether they make it or whether something is still missing: In addition to talent, diligence and ambition, it is also about fitness – physical and mental – equine and stable management, diet, media coaching and many other aspects. A wide range of experts help the participants of the Programme of Excellence on their path ahead.

Question: Back to the sport: How important are shows like the Aachen Dressage Youngstars, which got underway on Thursday, for this path?

Werth: Very important, because the athletes have to gain routine in performing tests also at a high level and have the opportunity to compete against the best of the best. This is the only way they can learn to cope with all sorts of situations and pressure. That is why several participants of the CAMPUS Programme of Excellence are competing here.

Question: What, in your opinion, distinguishes the Aachen Dressage Youngstars?

Werth: It is an orientation of the present state of affairs at the end of the season, the aspiring young riders can compete against their fellow colleagues again, especially also since the Aachen Dressage Youngstars is an international show. Add to that, of course, also the myth of Aachen and the rider’s big dream of having the chance to compete next door in the Deutsche Bank Stadium one day. Aachen is Aachen and will always remain to be a special show. 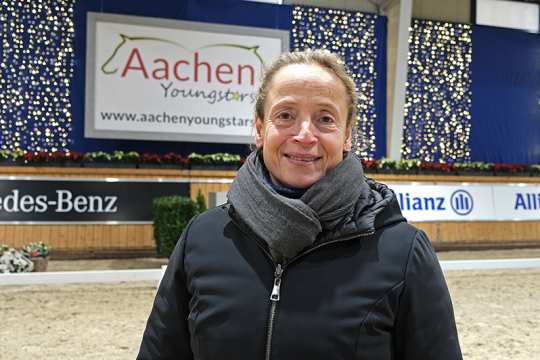