Steve Guerdat: “I wouldn’t want to miss a single CHIO – even if you could only win a bunch of flowers in Aachen.”

Steve Guerdat is the reigning Olympic gold medallist, he succeeded in winning the World Cup Final for the second time in a row – and is now hoping to claim his second Major victory in the Rolex Grand Slam of Show Jumping in succession at the World Equestrian Festival, CHIO Aachen 2016. An interview about memorable sporting moments, a horse that sways between ingenuity and madness and the fascination of Aachen.

You are only 34 years old, but are already considered to be one of the “old hands” of the sport because of all your achievements. Can you even remember your first CHIO Aachen?

I come from a family of riders. My father Philippe rode at the CHIO Aachen himself, so I already visited the show with him as a young boy. I was already fascinated by big sporting events in young years and always dreamt of being part of the CHIO Aachen – as a rider of course, not as a spectator. The first time I succeeded in doing so was in 2001 or 2002, and although I had already often been here as a spectator before, the show totally surpassed all of my expectations from an athlete’s point of view. That is still always the case too. I not only have goose-bumps every year when I arrive at the CHIO Aachen, but every day of the show as well. The people are so enthusiastic, the crowd, the atmosphere are incredible. Already a member of the league of top sporting events, Aachen, even goes a step further.

As the Olympic gold medallist of 2012, you are guaranteed a place on the starting list of the Rolex Grand Prix on Sunday. So you don’t have to excel in the normal qualifiers throughout the week. Is it an advantage or rather a disadvantage, when the pressure isn’t on until you compete in the final? After all, on Sunday your second Major victory in the Rolex Grand Prix and a bonus of 500,000 Euros in addition to the prize-money is at stake…

Of course, I am glad that I don’t have to qualify anymore and that I am not under pressure from the start of the week onwards. However, for all of my horses it is the first time they have competed here in Aachen, they are not used to the atmosphere, so the more competitions they participate in the better. Of course, I would like to win the Rolex Grand Prix, but it isn’t the huge amount of money that motivates me. It is the big stage here in Aachen. It is the enthusiastic spectators, who cheer me on when I enter the ring. It is the atmosphere, it is the fantastic sport. Even if you could only win a bunch of flowers here in Aachen instead of prize-money, I still wouldn’t want to miss a single CHIO!

Which horse are you intending to compete with on Sunday in the Grand Prix?

I am planning to ride Corbinian, but I am waiting to see how he performs in today’s Mercedes-Benz Nations’ Cup first. It is going to be a big competition for him this evening! If he performs well, I am sure he will be good on Sunday as well. He is a fantastic horse with amazing potential. But he is also a very emotional and sometimes spooky horse. He can master the first part of a course brilliantly, then a noise or something else might irritate him – and then he gets really nervous. I am still working on trying to find out how I can support him best in such situations. So, I am very curious to see how the Nations’ Cup turns out for us today. 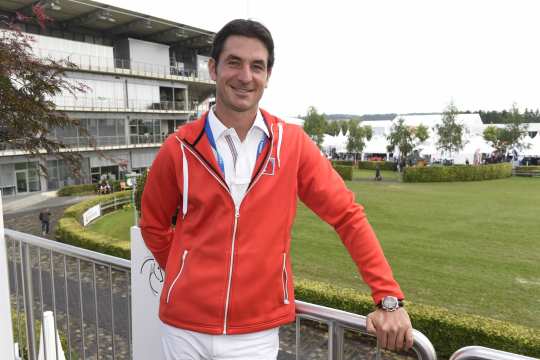