Halla back at the Soers

It was Halla’s first trip. The bronze statue weighing more than 600 kilogrammes set off for Aachen from Warendorf. During the CHIO Aachen (July 8th- 17th) the sculpture of the “wonder mare” of show-jumping legend Hans Günter Winkler, is temporarily setting up home here.

It is 60 years ago since “HGW” won Olympic gold with Halla in Stockholm. This year the five-time Olympic gold medallist, two-time World Champion and three-time winner of the Rolex Grand Prix is additionally celebrating his 90th birthday – reason enough for the organisers of the CHIO, the Aachen-Laurensberger Rennverein e.V., to pay tribute to him with a big gala. On Friday, July 15th, the spectators of the “Hans Günter Winkler Gala presented by NetAachen” will experience an exciting show programme, which will relive Winkler’s extraordinary sporting history. Throughout the course of which, the bronze sculpture, which is normally at home at the German Equestrian Federation (FN) in Warendorf, will be stood in the middle of the Main Stadium. The bronze statue designed by Hans-Joachim Ihle is 2.40 metres high and 2.80 metres long. “The FN was totally enthusiastic about the idea of having the sculpture brought to the CHIO Aachen in honour of Hans Günter Winkler from the very start,” explained Show Director, Frank Kemperman. So, the 600 kilogrammes were heaved onto a trailer using a crane and transported to the Soers. It attracted quite a few amazed glances on the motorway, just like the real Halla often did in the ring. She has safely arrived at the traditional showgrounds in the meantime. Tickets for the Hans Günter Winkler gala are still available online or from the hotline on +49-(0)241-917-1111. 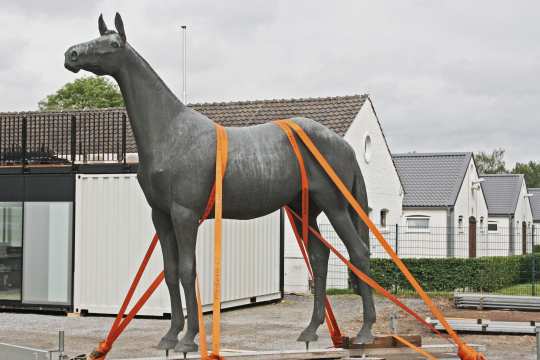 The Halla sculpture from Hans-Joachim Ihle.