French heroes and a battle between the teams from Cologne

Full house, fantastic atmosphere – the first decisions in the competitions of the Prize of Sparkasse in the vaulting at the CHIO Aachen 2022 have fallen and they rode on a wave of exuberance.

What could be better than winning the World Cup Final? Winning at the CHIO Aachen! Manon Moutinho must know, because the French athlete first of all vaulted to victory in the World Cup in Leipzig and today she won the Prize of Sparkasse. “I am super proud! It is the first time a French woman has won here in Aachen – and that against the huge competition, especially from Germany!” she said, overjoyed. After triumphing in Leipzig at the latest she was considered to be one the favourites at the Soers. Then, two weeks ago she injured herself after having a small accident in her free time. It was unsure whether she would be able to travel to Aachen. “I knew if I wanted to compete here, I’d have to be 100 percent fit.” She just managed to convalesce in time. The first competition, the compulsory test, didn’t go too well for her though. Manon’s horse Saitiri found the atmosphere in the Albert-Vahle Arena rather unsettling, which meant the pair and their lunger Corinne Bosshard only managed to finish seventh. However, in the technical test they put in a top performance and achieved the best result (8.351). Today, in the freestyle routine Manon more or less succeeded in defying the laws of gravity. She was the only vaulter awarded a score over 9, it was 9.116 to be exact. Thus, her combined score was 8.448. Manon’s conclusion, “It shows that mental strength is more important than anything else!”

One man’s joy is another man’s sorrow – both Manon Moutinho and the Swiss vaulter, Nadja Büttiker with Acardi van de Kapel, lunged by Monika Winkler-Bischofberger who finished second, benefitted slightly from Alina Roß’s bad luck. Roß, who was lunged by her father, Volker Roß, had up until then headed the field with Baron R. In 2019, the German Champion came fourth in Aachen, in 2021 she finished third and now the victory was within her grasp after winning the compulsory test and coming second in the technical test. Unfortunately, her freestyle was slightly jinxed today. Too many small faults meant that she ultimately ranked eleventh in the concluding competition – that threw her back into third place in the overall ranking.

European Champion, three-time World Champion, number one in the world ranking list – it was pretty clear which athlete was the one the men were going to have to beat this weekend in the Prize of Sparkasse: Lambert Leclezio from France, with Estado, lunged by Loic Devedu. To cut a long story short, the 25-year-old physiotherapist, who has dominated in the men’s competition at all the major shows for the past few years, left his fellow competitors trailing behind again. Whereby, he hadn’t competed in Aachen for a long time, not since 2013 when he was still a Junior. But he said: “It was always my dream to come here! The atmosphere, the organisation, everything is unique, crazy!” Now, he has had his big appearance in the Albert-Vahle Arena. No that’s not quite right, he actually had three, because he won all three parts – the compulsory test (8.820), the technical test (8.980) and the freestyle (9.106). In the freestyle, the judge at C, who was responsible for the artistic impression actually awarded him the top mark of 10.0. No, it is not the first time he has been awarded a 10. But this was a real consolation to him after pretty much everything went wrong for him at his last show in France. But the dress rehearsal always has to be a disaster, so that everything goes right on the day.

The fact that the five vaulters behind him all received scores of 8.0 and better, shows how strong the competition was in the men’s classification. The Dutch Junior World Champion Sam Dos Santos came second with Chamar, lunged by Rian Pierik-Bongers on a total score of 8.610. Sam can definitely be referred to as a wonder child. He only celebrated his 16th birthday three weeks ago. He wouldn’t have been able to compete in Aachen before that.

There was a real battle for third place. The four-time winner in Aachen, Thomas Brüsewitz with Eyecatcher, lunged by Alexandra Knauf scraped past Julian Wilfling with Aragorn, lunged by Alexander Zebrak, into third place, beating his score by three hundredths of a point. It could hardly have been any closer. Even though Wilfling performed a fantastic freestyle routine today, which secured him second place in that competition. Last year’s winner, Jannik Heiland, came fifth on Rockemotion lunged by Nina Vorberg (8.455).

The first German national hymn rang out for the first time at the CHIO Aachen 2022 for the vaulters of Team Norka Automation from VV Köln-Dünnwald with Calidor, lunged by Patric Looser. They were the best group in the Prize of Sparkasse. They won both the compulsory test (7.978) and the freestyle (8.986). Their combined result after both competitions was 8.484.

Second place went to Switzerland, to Team Lütisburg with Rayo de la Luz, lunged by Monika Winkler-Bischofberger (8.138). VV Ingelsberg finished third with Fider Rock, lunged by Lars Hansen and a score of 8.063 on the results table.

Patric Looser, himself a former Individual World Champion and today lunger of Team Norka Automation from VV Köln-Dünnwald, was very pleased with the performances of his team – although according to him they didn’t quite demonstrate their full potential today. Two or three small mistakes happened in their extremely difficult freestyle routine. But: “We are mega happy because we won, got good marks and asserted ourself.” The reason for the lacking ten percent? “There wasn’t quite enough pep.” Calidor “wasn’t the freshest” today either, Looser stated. Conclusion: “I always look at it long-term. Today, we had a few wobbles, everyone made some small mistakes in the compulsory test. So, we know what we have to work on now.” They will already have the opportunity to do so tomorrow in the Nations Cup, when they will perform their freestyle routine again.

VV Ingelsberg celebrated a small Aachen Comeback today. The group from Bavaria hadn’t competed at the Soers for years. Today, they put in a strong performance in the freestyle, the second-best result of all after scoring 8.617 – what’s more with a new choreography and a new horse. This was only Fider Rock’s second international appearance. “And that in such a setting,” assured Regina Burgmayr. She added that they had really looked forward to coming to Aachen. Aged 31, Burgmayr is the oldest team member and has been vaulting at top level since she was ten. “For us, Aachen is like competing at a small championship!”

Today, the first of two freestyle routines was on the agenda for the pairs in the pas de deux competition. The two European Champions and second runners-up in the World Cup, Chiara Congia and Justin van Gerven clearly moved into the lead on a final score of 8.574 with Eyecatcher, lunged by Alexandra Knauf. Second and third place also went to Germany: to Timo Gerdes and Jolina Ossenberg-Engels with Cairo (Lunge: Claudia Döller-Ossenberg-Engels) on a score of 8.383, followed closely by Diana Harwardt and Peter Künne with DSP Sir Laulau (Lunge: Hendrik Falk), who were awarded a score of 8.217. 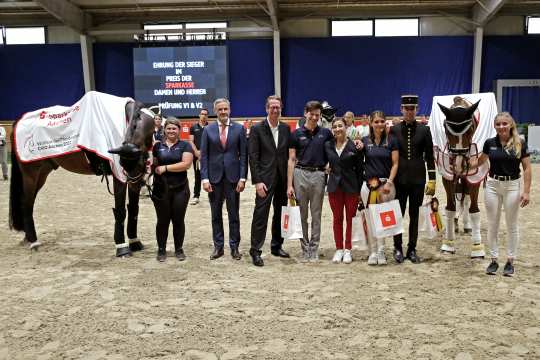 The two winners in the individual competition (center) were congratulated by ALRV Supervisory Board member Dr. Thomas Förl (2nd from left) and Thomas Salz, Member of the Board of Directors of Sparkasse Aachen (3rd from left). Photo: CHIO Aachen/ Michael Strauch