Following in her mother’s footsteps

Brianne Beerbaum was already pushed around the grounds at the CHIO Aachen in her buggy. She was always on board from an early age onwards when her parents competed at the Soers. The 12-year-old will actually be saddling a horse herself at the traditional showgrounds for the first time at the Aachen Jumping Youngstars. We paid the Beerbaums a visit in Thedinghausen.

It is cold in Lower Saxony on this day. The morning mist is starting to clear and is creating an almost already winter-like setting over the spacious and meticulously fenced paddock. A palomino pony with a young girl on its back is circling around in the middle. Without a saddle, but with a warm smile on her lips. Brianne Beerbaum canters over the lush grass with her Magic without holding on. A turn to the right, a turn to the left. Then, she dismounts and shows us proudly that her pony can even bow on command. “My horses are my friends,” explains the 12-year-old. That not only applies for her small, four-legged friend, Magic, who has been her companion for six years, but also for her sports partners, with whom she has already picked up several national and international victories in the show jumping ring. For example, with Carlucci, the impressive grey horse that Brianne describes as her teacher. “He knows everything there is to know about jumping, one really can learn a lot from him,” she says about the 16-year-old Holstein-bred horse, who carried Mynou Diederichsmeier to the title of German Champion in 2019.

Brianne profits from the playful and friendly approach with her horses in the jumping arena. “She has a very affectionate way of handling her horses,” says Meredith Michaels-Beerbaum. “The horses sense it and give her so much back.” The 52-year-old notices that every day when she trains with her daughter in the shade of her thatched house. At one time, the first female rider to become number one in the world ranking list, the rider who was born in the USA, has put her career on the shelf so that she can dedicate her time to Brianne. “I am enjoying this change in my life,” says the show-jumper, who has won numerous international medals. “Experiencing Brianne’s development is just as exciting as my own achievements were.”

Whereby, at first it wasn’t even clear whether her daughter wanted to ride at all. “She was very cautious as a small child,” her mother recalls. “We thought she wouldn’t be courageous enough to ride.” They certainly got that wrong. Brianne, who had travelled showgrounds all over the globe with her parents while still in a pram, wants to ride. Definitely. When the jumping pony, Wizard of Oz, moved into his stable at their riding establishment at home in Thedinghausen at the latest, she was totally zealous. “It makes us incredibly happy to see how much joy Brianne has with her horses,” says her father Markus Beerbaum, adding that his daughter is extremely skilful and has a good feeling for the right pace. “And her mum’s style,” the 52-year-old, who claimed gold at the World and European Championships with the German team, continues with a grin. Indeed, “Many people tell us that Brianne looks like a mini Meredith when she is riding,” reports the proud mother. It is very important to her that Brianne doesn’t feel pressure. “If she enjoys doing it, success will come all on its own,” the experienced rider explains, while Brianne rides over a few small jumps in the background.

The mother and daughter carry out their joint training sessions in English. Brianne, who attends an international school, is fluent in both languages and can switch between the two easily. “Training with mum is simply super,” the 12-year-old says, who took part in the German Youth Championships for the first time this year. And a further premiere that is also very special for the Beerbaum family is also just round the corner: Next weekend Brianne will saddle her experienced horse, Carlucci, for the Aachen Jumping Youngstars. “I have been there so many times. It is really a dream come true being able to ride in Aachen myself now,” says Brianne, who will no doubt also take a look in the legendary Main Stadium while she is there. That place where her parents have celebrated memorable victories in the past. It is therefore no surprise that the 12-year-old also has ambitious goals: “I would like to win the Rolex Grand Prix in Aachen one day,” the young aspiring talent says. “Like mum.” A big dream for a small girl, who will no doubt gallop over the meadow with her Magic many times before that happens. Totally playfully. Without a saddle. Without any pressure. 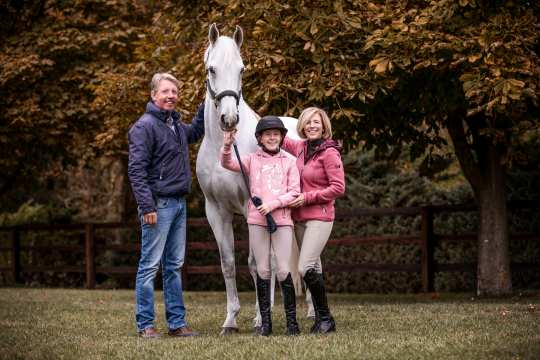 A dream come true - Following in her mother’s footsteps

Brianne's first start in Aachen: Visit with the Beerbaum family!