Immense joy for the dressage rider, Fabienne Müller-Lütkemeier! At the latest, now after the Lindt-Prize it must be clear to her: A new start has risen in Aachen, namely her “Schumi” alias Valesco.

Right after the lap of honour as the winner of the Lindt-Prize Fabienne Müller-Lütkemeier was on the one hand speechless, but on the other hand she raved about her Valesco: “Unbelievable! I am speechless! That is only his second ever Spéciale today, but he was so fantastic. He was really nervous, but he simply trusted me. And I am so thankful to him. Yes, it really is amazing! Really!” The judges were obviously of the same opinion – they awarded the ten-year-old Westphalian-bred gelding by Vitalis, who came to the Lütkemeier family as a three-year-old, a score of 77.638 percent. Because he has “always put his foot down” he we quickly nicknamed “Schumi”. First time in Aachen, second Grand Prix Spéciale, victory in the Lindt-Prize – the name is obviously very apt!

The British rider, Charlotte Fry, claimed her second silver rosette today. After coming second in the Prize of Family Tesch this afternoon, she also finished second in the Lindt-Prize tonight, this time with Fry’s former World Champion of the Seven-Year-Old Dressage Horses, the ten-year-old KWPN stallion, Glamourdale by Lord Leatherdale (77.170 percent).

Denmark’s Anna Kasprzak and her Westphalian-bred Rockwell son, Rock Star, really did rock the Lindt-Prize today and came third with a score of 75.064 percent. 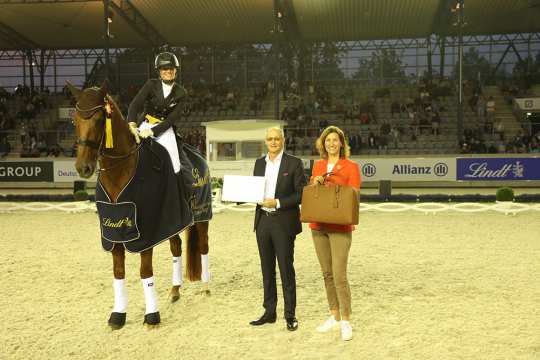