Only a few days ago the dressage national coach, Monica Theodorescu and Fabienne Müller-Lütkemeier decided that Valesco alias “Schumi” is ready for Aachen. So, they loaded him up, entered him – and won. As the first pair to go in the HAVENS Horsefeed Prize they delivered the best result.

The former team World and European Champion Fabienne Müller-Lütkemeier and her ten-year-old Westphalian-bred gelding by Vitalis opened the HAVENS Horsefeed Prize at 13.30 with a total score of 74.174 percent. As the last horse left the dressage arena in the Deutsche Bank Stadium at 17.33, the pair were still in the lead.

For Fabienne Müller-Lütkemeier, this victory in Aachen is a further milestone in the schooling of the chestnut gelding, whom she has had since he was a three-year-old and trained up to Grand Prix level. Valesco quickly acquired his nickname: Schumi. “Because he simply always puts his foot down.” And the Grand Prix career of the gelding was also a vertical take-off. He competed in his first three-star dressage competitions at the end of the green season in 2020, two weeks ago Müller-Lütkemeier entered him for his first international show (which they also won) and now the two of them rocked the Deutsche Bank Stadium. What this victory means to Fabienne Müller-Lütkemeier? “A great deal, of course! He has developed so well over the past weeks that we thought he is ready to compete in Aachen.” He confirmed that today.

The Danish flag flew for Anna Kasprzak, who made her comeback at the Soers after four years due to maternity leave and Corona. The Danish rider came second on a score of 73.935 percent. She had brought the Westphalian-bred gelding, Rock Star by Rockwell with her and the gelding achieved his personal best score on the international circuit.

Emmelie Scholtens came third twice today. In the morning her Apache son, Indian Rock, carried her into third place in the Small Tour and this evening she picked up the white rosette with her championship horse, Desperado N.O.P., after being awarded a score of 73.739 percent. 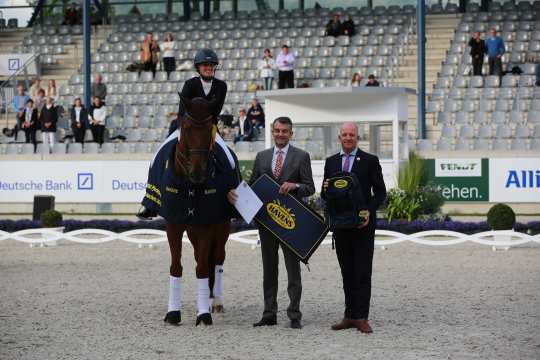