CHIO Aachen: The German vaulters get off to a strong start in the Prize of Sparkasse

From the German athletes’ point of view, the opening day at the CHIO Aachen 2017 couldn’t have run more smoothly. Since 2007, the vaulters have opened the World Equestrian Festival in the Albert-Vahle Halle on the first weekend of the show.

Today, two of the three tests in the Prize of Sparkasse were on the agenda, the compulsory and technical tests. The black, red and gold flag was flying over the winner’s rostrum in the ladies, men’s and team classifications. This was no surprise for the national coach, Ursula Ramge: “We travelled to the CHIO in the knowledge that we had a very strong line-up, she explained. The last tickets for the imminent European Championships at the beginning of August in Austria are up for grabs in Aachen for the vaulters. So it is no surprise that Janika Derks, who is heading the field in the ladies classification after the compulsory and technical tests, said: “Our preparations for Aachen regarding the training are even more focused than usual. The aim is to deliver the best performance possible.”

Derks, for whom it is just the second season competing in the ladies classification, definitely did just that. After a convincing victory in the compulsory test and third place in the technical test with Auxerre, lunged by Elisabeth Simon, she has a slight lead in the overall standing with a score of 8.014 points.

The current World Cup winner, the Italian vaulter Anna Cavallaro with Monaco Franze lunged by Nelson Vidoni, achieved exactly the same placings, but the other way round and is now lying second with a score of 7.851. She came third in the compulsory test and won the technical test. Her score didn’t quite suffice to overtake Derks, but did enable her to keep the three other German ladies at bay.

Corinna Knauf with Fabiola (Lunge: Alexandra Knauf) is close at Cavallaro’s heels. The 24-year-old, who celebrated the biggest achievement in her career two years ago here in Aachen when she claimed silver at the European Championships, scored 7.834.

In the men’s competition, last year’s winner, Thomas Brüsewitz, took the lead with Bigstar with Irina Lenkeit on the lunge (7.837). He won the compulsory test by a clear margin and also animated the spectators to enthusiastic applause in the technical competition.

Erik Oese currently lies second on a score of 7.748. After “only” coming fifth in the compulsory test with Calvador and Andreas Bäßler on the lunge, he set himself the task of catching up in the technical test and actually went on to win the class.

Jannik Heiland with Highlander (Lunge: Winnie Schlüter), who was in second place after the compulsory, had bad luck in the technical test, which began very well, but unfortunately she fell at the end. With an interim score of 7.375 this put him back into fifth place, behind the Swiss vaulter, Lukas Heppler with Cairo (Lunge: Petra Cinerova, 7.507).

The Germans are also calling the shots in the team competition too – by a long way! The group from RSV Neuss-Grimlinghausen with Delia and Elisabeth Simon on the lunge put in an outstanding performance. With an interim score of 7.929, the team from Neuss asserted itself against their eternal rivals from the vaulting club Köln-Dünnwald with Picardo, lunged by Patric Looser (7.756). Incidentally, the squad from Cologne has already qualified for the European Championships 2017. The Italian team currently rank third with the team C.I.M. Italy with Hot Date Tek (Lunge: Laura Carnabuci, score: 7.084). 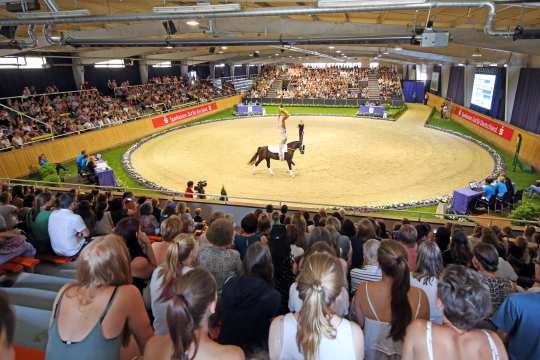