The World Equestrian Festival, CHIO Aachen 2021 is doing away with printed starter and result lists. For the organisers of the show, which is being staged at the traditional showgrounds at the Aachen Soers from September 10th-19th, this is a further step towards more sustainability.

The starter and result lists will be available in digital form, either in the free CHIO Aachen app or via a QR code that can be scanned. “Everyone is familiar with scanning QR codes in the meantime and anyone who visits the CHIO should have our app on their phone,” said Frank Kemperman, Chairman of the organisers, the Aachen-Laurensberger Rennverein e.V. (ALRV). The online lists feature a “live scoring“, the list is automatically digitally produced and is thus constantly up-to-date. Kemperman sees a further advantage from the show dispensing with printed copies: “As such, the lists no longer have to be distributed, which means that significantly less contact situations arise, which is an important factor during these Corona-stricken times.” No printed lists or press releases will be available in the Press Centre either. Through these measures tens of thousands of paper print-outs will become superfluous. The “CHIO Aachen Media Guide” has exclusively been available to the accredited journalists in digital form for several years, “which has gone down very well,” confirmed Kemperman. The programme will also be exclusively offered in digital format for the first time in 2021. It can be browsed online as a so-called “flip book” via the website or the app or alternatively it can be downloaded on the end device as a PDF.

“Taking a responsible attitude towards the environment is more important than ever, we are absolutely committed to sustainability,” said Stefanie Peters, President of the organisers, the Aachen-Laurensberger Rennverein e.V. (ALRV). In this way, the organisers have also – together with external experts – drafted a revised concept on recycling and the avoidance of waste. “It is a bundle comprising of many measures such as the provision of containers for collecting bottles, the obligation for caterers and exhibitors to avoid the use of plastic, a complete ban on plastic bags, the use of plastic-free crockery, a waste separation concept and many further individual measures, which come together to form an holistic approach,” Kemperman stated.

The free CHIO Aachen app in the Play Store 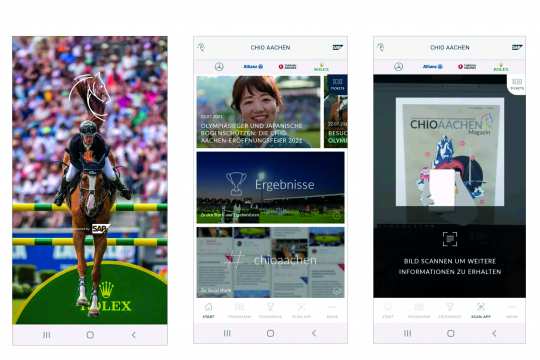 The CHIO Aachen App - The indispensable companion for your show visit