Thunderous applause. Standing ovations. And a few tears in the eyes of all involved. Marcus Ehning and Pret A Tout journey together came to an end on Saturday evening at the showgrounds of the Aachen Soers.

Pret A Tout stood relaxed, on a long rein under the spotlights of the Main Stadium, surrounded by the people, who have accompanied him throughout his life: His breeder Bruno Louchet, his owner Ruth Krech with her daughter Carol, his former rider Kaya Lüthi and his groom Melina Jobst. The national coach Otto Becker held the laudation for a horse, that has brought the German equestrian sport countless victories: “We particularly thank his owner Ruth Krech for placing Pret A Tout at the disposal of the German team for so many years.” Visibly moved, Mrs. Krech, who rode the horse herself in younger years, stood next to Pret A Tout. “I find Bruno Louchet gave this horse exactly the right name. Pret A Tout. Ready for everything,” said Ruth Krech. “I am so grateful to have found Toutou. He has brought us so many unforgettable moments.”

And there really have been so many of these moments. The gelding was 12 years old, when he came to Marcus Ehning in 2015. Prior to this he had helped the talented young rider, Kaya Lüthi, make the breakthrough to top competition level. She won silver at the European Championships of the Young Riders with him three times, twice with the team and once in the individuals. Under his rider Marcus Ehning, Pret A Tout became a true star. Particularly the Main Stadium in Aachen became a successful venue for the pair: In the years 2016, 2017 and 2018, the two of them were members of the winning team in the Mercedes-Benz Nations Cup three times in succession – a unique record! With the victory in the Rolex Grand Prix in 2018 the Hiram Chambertin/Stew Boy son enabled his rider the second entry on the legendary Winners’ Board after his first triumph in 2006. In December of the same year, the pair also rode to victory in the Rolex Grand Prix in Geneva. And since both Aachen and Geneva are part of the Rolex Grand Slam of Show Jumping, Marcus Ehning was only the second rider ever to secure himself a bonus in this prestigious series. The sporting partners crowned their joint achievements by claiming team bronze at the World Equestrian Games in Tryon (USA), also in 2018. “He is a once-in-a-lifetime horse,” stated Marcus Ehning, before sending the chestnut gelding off on his final lap of honour in top form. Pret A Tout. Ready for everything. He is now ready to retire. And he certainly deserves it. 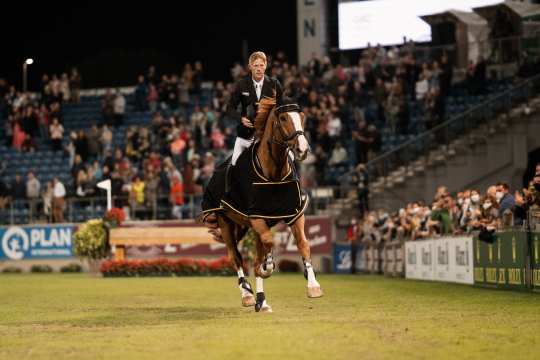