The “Top Score” competition, the Prize of Fa. Horsch, Der Entsorger, is not a normal obstacle driving competition. Here, the drivers can more or less select the route themselves. An exciting affair; today the French driver, Benjamin Aillaud, had the best tactic.

The principle of the “Top Score” competition is as follows: The course comprises of various obstacles, for which depending on the level of difficulty there are is a different number of points. The drivers select their own route and have three minutes time to pass through as many as possible, whereby they are only allowed to drive through each obstacle two times at the most. Ultimately, the driver, who has collected the most points in the fastest time, wins.

In this case it was the French driver, Benjamin Aillaud, was the only driver to score 1830 points with his team. Koos de Ronde from the Netherlands came second on a score of 1730, followed by Jérôme Voutaz for Switzerland (1700) and the two German drivers, Christoph Sandmann (1690) and Georg von Stein (1620). 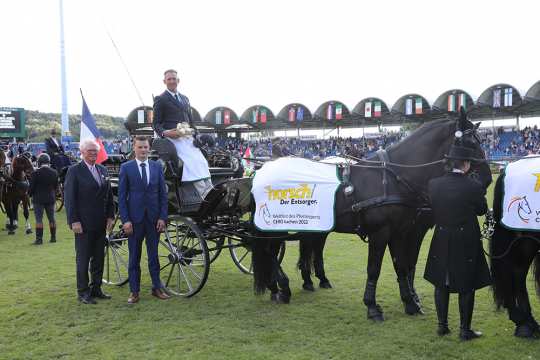