It is at its best experienced live in the stadium, however the World Equestrian Festival, CHIO Aachen, is also being extensively covered on TV. WDR is already broadcasting the 45-minute long documentary “Mega Event CHIO Aachen” on Friday evening, July 12th, (8.15 p.m.).

The highlights from July 16th onwards are the Opening Ceremony on Tuesday evening (8.15 p.m., WDR live), the Mercedes-Benz Nations Cup on Thursday evening (8.15 Uhr, WDR live), the SAP-Cup (cross-country competition of the eventers) from 10.30 a.m. to 12.30 p.m. on WDR and on the final Sunday (July 21st) the live coverage of the Rolex Grand Prix and Deutsche Bank Prize (Dressage) on ARD and WDR. The live programme will be enhanced by summaries and post-reporting on the individual days of the show – such as the famous Farewell to the Nations. Furthermore, there will be live transmissions daily on a wide range of WDR formats.

Thanks to cutting-edge camera technology – for instance the spectacular “Spidercam” will be implemented as well as 360 degree cameras – the CHIO Aachen 2019 is also going to be a thrilling experience in front of the TV screen or monitor. 250 TV employees on-site are responsible for transmitting the TV coverage all over the globe. The national public television channels will broadcast over 30 hours of images from the World Equestrian Festival. On top of the sports coverage, various magazine formats, news films and TV reports by Studio Aachen, which all provide an exciting look behind the scenes. The coverage will be transmitted internationally to over 140 countries.

Moreover, all of the competitions can also be watched online live on ClipMyHorse.TV.
www.clipmyhorse.tv

The current TV times for the CHIO Aachen 2019 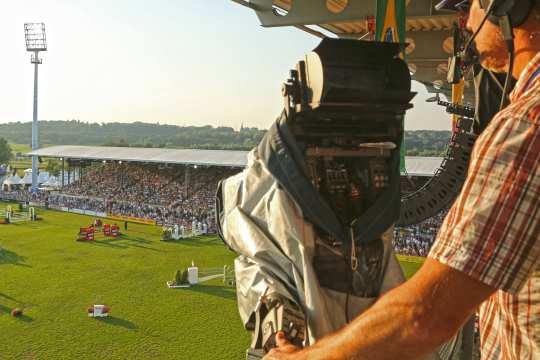