An orchestra meets dogs and ducks: “Horse & Symphony” at the CHIO Aachen 2017

“Put in your request” at the CHIO Aachen: The programme and the music of the two “Horse & Symphony” concerts on July 14th and 15th, is going to be determined by the public this year. What should the Aachen Symphony Orchestra play under the direction of Kazem Abdullah and which show will be performed to the individual pieces of music? Requests were submitted online and using the forms in the Aachener Zeitung and Aachener Nachrichten. More than 200 requests were received and now the organisers have announced initial items on the programme.

Right at the top of the list: Anne Krüger. She impressed the concert-goers in 2014 last time. Well, strictly speaking, it wasn’t her, well at least not on her own, but rather her dogs and ducks. Being able to see her in action again, was not only frequently requested by the public, but was indeed a wish expressed by Aachen’s General Music Director, Kazem Abdullah, himself. Of course, this wish is going to be accommodated. A liberty dressage performance and Spanish horses was also frequently on the list of requests. “We will also gladly oblige here,” said CHIO Aachen Show Director, Frank Kemperman. Hence, Kerstin Brein will perform a liberty dressage choreography with her Welsh ponies to the music of “Over the Rainbow”, Britta Rasche will be presenting the Spanish horses. Albeit not alone, she will namely be accompanied by the dancers of the TSZ Aachen dance group. Further items on the programme will be announced at a later date.

Due to the huge interest in the “Horse & Symphony”, the organisers have decided to offer two dates again this year. There are still tickets left for the Friday evening, July 14th. Only standing area tickets and a few individual seats are still available for the Saturday, July 15th. Tickets can be ordered at www.chioaachen.de as well as from the hotline on +49-241-917-1111. The concerts both begin at 8.30 p.m. 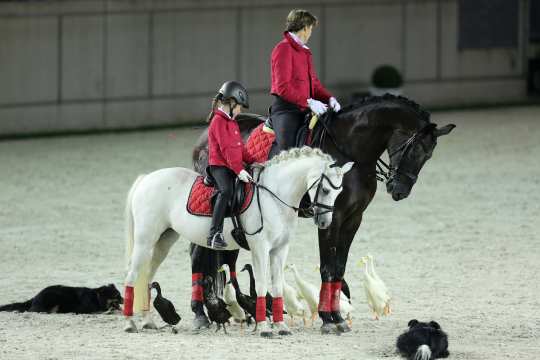