Vogel (the bird) flew to victory in the German U25 Trophy

Richard Vogel wins the German U25 Trophy of the Stiftung Deutscher Spitzenpferdesport, Prize of Family Müter, for the second time in succession. A particularly valuable victory for him.

Riding the 13-year-old Holstein-bred Lesson Peak, the 22-year-old Richard Vogel crossed the finish line in the fastest time of the four riders, who jumped clear in the jump-off of the German U25 Trophy of the der Stiftung Deutscher Spitzenpferdesport, Prize of Family Müter: 41.42 seconds. Enno Klaphake with Urus (42.42) finished second. Finja Bormann was overjoyed at coming third with A Crazy Son Of Lavina (42.42). The fourth rider to jump clear was Maximilian Lill with Capitale (45.08).

Up until the beginning of the year, Richard Vogel rode for Ludger Beerbaum. He left Riesenbeck in January to move back to Baden-Württemberg, where he has turned self-employed with a training and competition yard in Viernheim, near Mannheim. He took the horse he won with today with him, Lesson Peak. The horse previously celebrated several victories with Philipp Weishaupt and Vogel is very grateful that his former employer has entrusted him with the Lord Z son. Otherwise, he only has young horses to ride at the moment, which have, nevertheless, also been keeping him very busy – he has namely succeeded in qualifying nine five and six-year-old aspiring jumping horses for the National Championships in September, one with the record score of 9.8: Carlchen S by Comme il faut. The S stands for no less than his breeder and owner, Hugo Simon.

Enno Klaphake, 19 years old, the brother of the Nations Cup winner of the CHIO Aachen 2018, Laura Klaphake, has just taken his GCE A-levels and is in the lucky position to be able to concentrate on riding at present before he starts his apprentice like his elder sister. As is true of all his horses, Urus, his U25 horse belongs to Paul Schockemöhle.

Finja Bormann works as a professional rider at the Drei Eichen Stud in Niedersachsen, which belongs to the Müter family, who sponsor the U25 Trophy. Finja replaced Leonie Krieg, who had actually qualified for Aachen. It was her fourth appearance in the German U25 Trophy and she was delighted: “Clear at last!” Although it is not her only achievement this year. She also won the Grand Prix of Nörten-Hardenberg, represented Germany in the Nations Cup for the first time in Aalborg and jumped clear in five classes of the Big Tour at Arnheim. Her reward: She has qualified for her first CSI5* next week, which is why she didn’t risk too much in the jump-off today. But who knows perhaps she will be competing in the Big Tour of the CHIO Aachen soon… 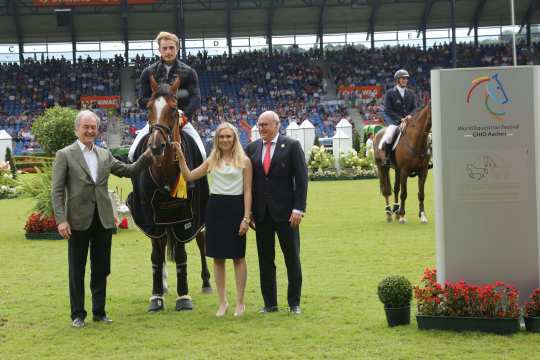