Victory for Sönke Rothenberger with Cosmo

Olympic gold medallist, World and European Champion, last year’s winner Emilio with Isabell Werth and many other big names had a rendezvous for the HAVENS Horsefeed-Prize, the Grand Prix of the CDI4* Tour. In the end, Sönke Rothenberger and his superstar, Cosmo, secured themselves the victory with a clear lead.

Sönke Rothenberger and Cosmo won the HAVENS Horsefeed-Prize with a score of 81.370 percent. That is the second-best Grand Prix result the team Olympic gold medallist of the year 2016 has ever been awarded in a Grand Prix – and that although Rothenberger didn’t even risk all. They have only beaten this score once before, namely at the World Equestrian Games in Tryon in 2018, where they won gold with the team. This year Aachen is only the pair’s second show. The last competition prior to Aachen, the German Championships in Balve in mid-June, came to an end for the pair before it had even begun, since shortly after arriving at the showgrounds, the twelve-year-old KWPN gelding came down with colic and had to be taken to the clinic. Today, he seemed as fit as a fiddle in the Deutsche Bank Stadium, scored several 9s and was also awarded the odd 10 by the judges.

Second place went to Isabell Werth and Emilio, the pair that won the Deutsche Bank Prize last year. They scored under the 80-percent mark today, 79.450 to be precise. Third place went to Denmark’s, Cathrine Dufour with the meanwhile 16-year-old Cassidy, her long-standing successful partner, whom she already won infinite medals with during her days riding for the Juniors and Young Riders. She also competed at an Olympic Games for the first time with him in 2016 in Rio as well as picking up bronze in the individual classification at the European Championships in Gothenburg in 2017. 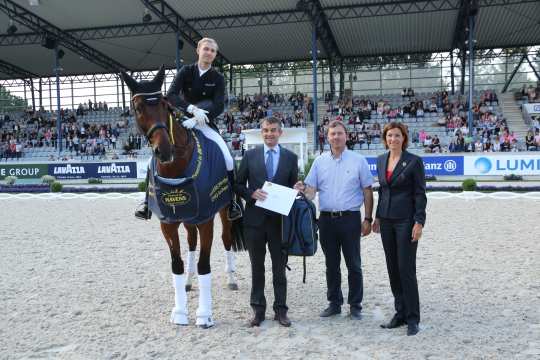