She picks up gold medals as if it were the most normal thing in the world. The 15-year-old has already been crowned Indoor Champion twice at the Aachen Dressage Youngstars too. We visited Rose Oatley at her home in Lütjensee.

The autumn leaves are shining in the morning sun and casting beautiful shadows over the newly created outdoor dressage area. In the background, horses are dozing on their spacious paddocks, others are enjoying the view of the surrounding countryside from their windows. The only thing that is disturbing the picturesque idyll is the fast clicking of a photo camera. Rose Oatley is posing on the cobblestones in front of the stables with Daddy Moon, her soul mate pony, as the 15-year-old lovingly calls her sports partner. “I simply owe everything to him,” she said with red cheeks, whilst her eyes light up full of pride. The pair’s list of achievements is long. Incredibly long. The three gold medals at the European Pony Championships in 2021 as well as taking the title at the German Championships this year are just a small excerpt from the list of victories. Questioned about her best joint moment, Rose doesn’t have to consider for long. Anyone who expects her to launch into a review from her world record performances, couldn’t be more mistaken. “The best moment was when I saw Mooni for the first time,” Rose recalls and strokes her palomino pony affectionately over his muzzle.  A beautiful scene of a young athlete, who is still down-to-earth and refreshingly natural in spite of all her victories.

The moment she is describing, took place six years ago in the meantime. Rose was nine years old when she found the then recently crowned German Champion of the six-year-old dressage ponies, standing in one of the stables as a surprise for her. Up until then she had learned the ropes of riding together with a friend at a local pony farm. Without pressure, without force, in a playful manner. “That was very important to me. We wanted Rose to find out for herself, if riding is the right hobby for her or not,” her mother Kristy Oatley explained. Her two brothers, Oskar and Ben, weren’t interested in riding. But that is totally alright, “they are mad on tennis and football.” The latter is hardly surprising: Their father Piotr Staczek is a former professional footballer, who played for FC St. Pauli.

But Rose likes riding. It fascinates her working together with the four-legged partners that make this sport so unique. From the start she has dreamt about being as successful as her mother one day. “Or perhaps even a bit more successful,” says Rose with a grin. That is a big goal, after all Kristy Oatley represented her native country, Australia, at the Olympic Games no less than four times. The 44-year-old moved to Germany as a young girl to make a name for herself in the saddle. Rose is now also dreaming of such a career. She sees her mother as a role model and highly appreciates her as a trainer. A constellation which works very well. “We can always talk about everything,” says Rose, who also constantly analyses her own performance self-critically. “I am content when I know that I have done my best,” comments the young rider, who not only competes in the Pony category at international level, but parallel to that also in the Juniors category. 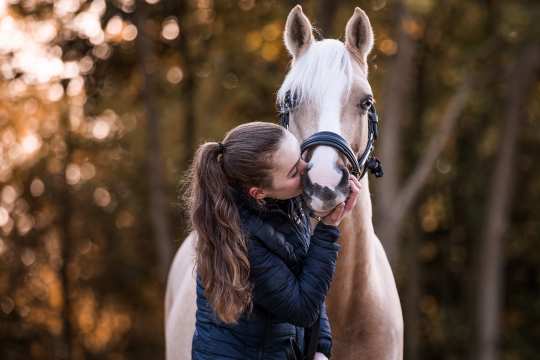 Moving on to big horses from ponies is no problem for Rose. She has ridden her mother’s horses from an early age, she practices advanced level exercises on Kristy’s top horse, Du Soleil. Rose is committed, eager to learn and extremely talented. “I sensed that straightaway, the first time I saw her on a pony,” Kristy Oatley reports about her daughter, who puts the sport in front of everything else. “Ok, I have to go to school,” laughs Rose, who apart from riding keeps herself fit with kickboxing. “That strengthens the torso and improves the balance,” is how she explains the advantages for the equestrian sport, which her life revolves around. The move to their own riding yard last summer has made everything much easier. Whereas the horses were located in Reinbek which is just under 30 kilometres away beforehand, their new domicile is now a stone’s throw away from the family’s house in Lütjensee. Super for Rose: She can cover the short distance on her bike. And she does that daily. Sometimes even several times.

Alongside Daddy Moon, four horses currently await her on the spacious grounds, for Rose each of them is special. With Veneno she made up part of the victorious German team at the European Championships of the Juniors this year, shortly afterwards she came fourth at the German Championships with Rock Revolution. And then there is the seven-year-old Sommernacht. “She really is an incredible mare. From the very first moment I knew that she fitted in perfectly with us,” Rose raves about the former winner of the German Championships of the five-year-old dressage horses, with whom she picked up gold in her first ever international test at Zakrzow in Poland at the end of October. The quartet is rounded off by the World Championship silver medal winner, Hesselhøj Downtown. The six-year-old recently moved into his stable in Lütjensee. “The chemistry between us is simply right,” Rose says happily about a further exceptional horse, with whom she intends to make her dreams come true in the future. One of these dreams is to compete at the CHIO Aachen. “Every year when I am allowed to compete at the Aachen Youngstars, I ride a few rounds in the Deutsche Bank Stadium at walk,” explains Rose. “The atmosphere there is simply unbelievable. It would be fantastic to ride there one day.” And it would be a further milestone on the way towards following in the footsteps of her mother Kristy.