Results of the Prize of Sparkasse

Results of the Prize of Sparkasse

Kristina Boe is vaulting in a league of her own this season. She headed the field with a clear lead against her fellow female competitors in the Prize of Sparkasse at the CHIO Aachen 2018 today. The decisive element was her fantastic freestyle, in which not only the sporting aspect played a big role for the vaulter from Hamburg.

With a final score of 8.186, the casualty surgeon, Kristina Boe, asserted herself in her own country against her fellow competitors on Don de la Mar lunged by Winnie Schlüter: Sarah Kay came second with a score of 7.927 ahead of Janika Derks, who finished on a score of 7.902. In addition to the top ranking three, Corinna Knauf also performed an outstanding freestyle routine, which meant she ranked sixth in the overall classification (7.688). Fourth place went to the Italian vaulter, Anna Cavallaro (7.809) and Silvia Stopazzini claimed sixth place (7.728).

Kristina Boe’s new freestyle choreography was inspired by the British behaviour researcher, Jane Godall, who collected significant knowledge about the behaviour of chimpanzees in Africa in the 1970s and finally went on to become an activist instead of an observer, fighting for the rights of animals and the environment. “I have been thinking about this choreography for a long time,” reported Kristina Boe after her splendid performance, which she was awarded a score of 9.862 (!) for. “I found it a great idea to be able to pass on the positive message of this impressive lady!” Which she certainly succeeded in doing. The World Cup winner, who vaulted to victory the last time at the CHIO Aachen in 2016, performed an excellent freestyle and the national coach, Ursula Ramge, explained tellingly: “It was in line with my expectations!”

Hattrick for Thomas Brüsewitz in the Prize of Sparkasse

Thomas Brüsewitz has won the individual men’s classification in the Prize of Sparkasse at the CHIO Aachen for the third time in succession. Certainly no coincidence!

Thomas Brüsewitz loves coming to Aachen: “It is definitively my favourite international show!” No wonder! He headed the ranks here in 2016, the same was true in 2017 and in 2018 he has done it again. With a final score of 8.219, Brüsewitz asserted himself against his former training partner and roommate Jannik Heiland (8.168). Followed by the current World Cup winner, Jannik Drewell (8.023).

Brüsewitz laid the foundation for his success with a fantastic compulsory test, the first of in total three competitions on the way to CHIO title number three and the first individual victory in Aachen with Danny Boy lunged by Patric Looser. He came third in the technical test and won the freestyle – with a mere thousandth of a point lead ahead of Jannik Heiland. Brüsewitz received a score of 8.752, Heiland scored 8.751. It really couldn’t have been any closer!
But now all parties have to call up their top form again, because the Nations Cup is on the agenda tomorrow! However, that is not the only major title that will be decided in the Prize of Sparkasse, on Soers Sunday at the CHIO Aachen 2018. The action kicks off with the Pas de Deux. The Germans have already done some good groundwork here. After the first round today, the two reigning World Cup Pas de Deux winners, Torben Jacobs and Theresa-Sophie Bresch, on Holiday on Ice lunged by Alexandra Knauf scored 8.630. The Italian duo Silvia Stopazzini and Lorenzo Lupacchini are currently lying in second place with Rosenstolz (Lunger: Laura Carnabucci) on a score of 8.479, followed by Jolina Ossenberg-Engels and Timo Gerdes on Caram OE (Lunger: Claudia Döller-Ossenberg-Engels), who have an interim score of 8.371. 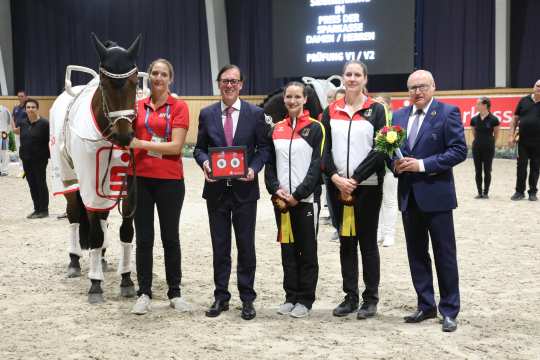 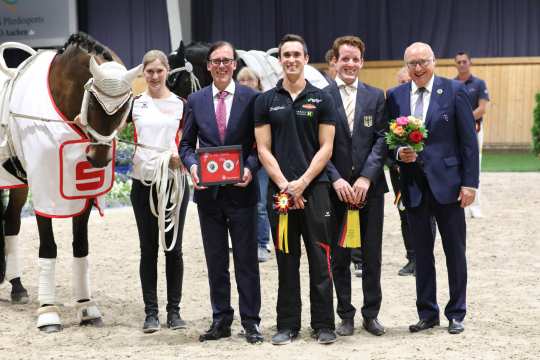