Laura Kraut wins the STAWAG Prize for the USA

Before the course was rebuilt for the Mercedes Benz Nations’ Cup, the STAWAG Prize, a competition against the clock, was held in the Main Stadium. Laura Kraut from the USA, the Olympic team gold medallist of 2008, reached the finish line in the fastest time, after knocking almost a second of her closest rival’s time with the Holstein-bred gelding, Confu.

She was followed by the two Irish riders, Jonathan Gordon with Fellini and Cian O’Connor with Calisto. Felix Haßmann and Cayenne delivered the best German result: fourth place. The team World Champion of 2010, Janne-Friederike Meyer, came fifth with Chuck and Christian Ahlmann was right behind her in sixth place with Cornado II.

Incidentally, Christian Ahlmann’s horse doesn’t bear the suffix “II” after his name for no reason. He is the younger brother of Cornado NRW, the potential Olympic horse of Ahlmann’s fellow team member, Marcus Ehning. 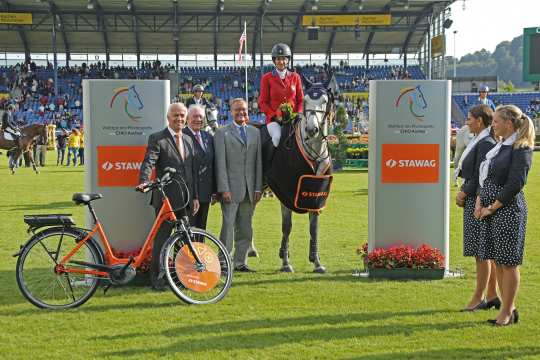 The directorates of STAWAG, Dr. Peter Asmuth and Dr. Christian Becker as well as Hans Kauhsen, member of the ALRV supervisory board, gratulate the winner. Foto: CHIO Aachen/Michael Strauch