He has an exceptional relationship with horses. Jean-François Pignon is a superstar, the master of liberty dressage already impressed the crowd in Aachen in 2014. The CHIO organisers have been able to win him over for another guest performance for the “Horse & Symphony” concert at the CHIO Aachen 2019.

Pignon has occupied himself with horses for over 30 years, his first liberty dressage performance in the year 1991 was already a huge success. The scenes from the year 2014, when he guided up to ten horses around the Deutsche Bank Stadium purely using gestures and commands remains unforgettable, then he even galloped through the stadium standing on two of them – without reins or even a bridle.
It is always a unique atmosphere when the sun slowly sets and great show performances meet great music. 2019 promises to be spectacular, because in addition to Pignon, the concert-goers can look forward to further excellent stars from the show scene and sports circuit. Accompanied by the live music of the Aachen Symphony Orchestra under the direction of the General Music Director, Christopher Ward, among others the dressage star, Helen Langehanenberg, is awaited in the arena in Aachen. Also on the agenda, a herd of Camargue horses, riders from the fantastic Grandes Écuries from Chantilly and Mélie Philippot also from France with a very special pas de deux . 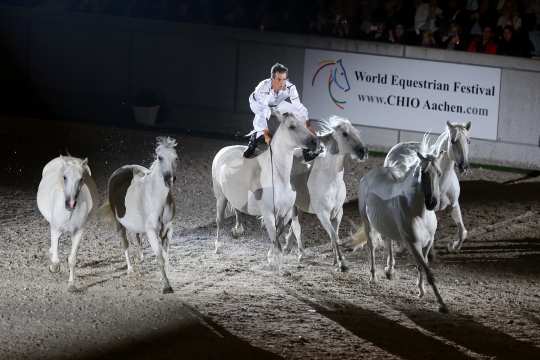 The photo shows Jean-François Pignon at the "Horse & Symphony" in 2014. The photo can be used copyright-free (Photo: CHIO Aachen/Andreas Steindl).