The dressage legend Isabell Werth continues writing her own CHIO Aachen stories: Today, she won the Deutsche Bank Prize for the 14th time.

A lot of new faces danced through the Deutsche Bank Stadium this weekend. But in spite of the new line-ups, the German team remained unbeatable in the Lambertz Nations Cup. And Isabell Werth, who is now eternalised on the Winners’ Board next to the entrance of the Main Stadium with her sixth horse, claimed the victory in the Deutsche Bank Stadium for the 14th time with her four-legged newcomer.

It may be her 14th triumph in the Deutsche Bank Prize, but there is still something that motivates Isabell Werth every year again and again: “I felt really inspired when I entered the arena. It is something very special to ride in this stadium to compete in this atmosphere.” This not only carried her, but also her horse Quantaz. On Friday, when there were significantly fewer spectators in the Deutsche Bank Stadium, she had had quite a bit of difficulty coping with the temperament of her Quaterback son, Isabell Werth had reported. But today the pair completed a Freestyle á la Werth, which the rewarded with a score of 88,335 percent. “I think he really showed what is possible today and how much potential he has. I am very proud. I didn’t mind on Friday. I prefer having a horse that is a bit sharp and willing to go. Okay, it was a little too much, but today he was very focused and concentrated,” the most successful equestrian athlete of all time summed up. Werth considers Quantaz to be her next horse for top level sport.

Second place went to the Dutch newcomer, Dinja van Liere with her just nine-year-old KWPN stallion Hermes by Easy Game on a score of 86.740 percent. It was the pair’s second international freestyle ever. And the 31-year-old has only ridden three herself. “If anyone had told me I’d be sitting here next to Isabell Werth today, I would have said they were crazy,” the Dutch rider commented. Whereby, the German national coach, Monica Theodorescu said that van Liere is definitely one of the riders one will have to keep an eye on in the coming years.

The British rider, Charlotte Fry, ranked third with Dark Legend, after being awarded a score of 83.675 percent. That is the second-best freestyle result in her career. She recorded her personal best with her championship horse, Everdale, at the European Championships in Hagen. In addition to him and Dark Legend, she also presented a further big talent, Glamourdale, in the four-star tour in the Deutsche Bank Stadium. All three horses stand next to each other in the barn and compete against each other to top the stable rankings,” the 25-year-old British rider said with a wink. 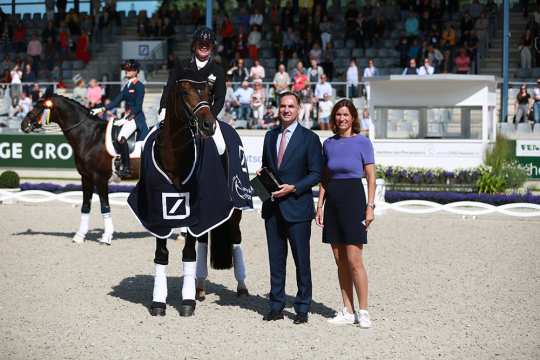