The Swedish rider, Henrik von Eckermann, has claimed many good placings in Aachen. But until now he has not succeeded in taking the victory in one of the main competitions. Today, his time had come in the Turkish Airlines Prize of Europe – what’s more on a horse that he borrowed for the “Show of all shows” (von Eckermann).

Frank Rothenberger, the Course Designer’s plan came off – he wanted ten to twelve pairs for the jump-off of the Turkish Airlines Prize of Europe. Eleven riders jumped clear in the first round, including Henrik von Eckermann with Castello, the just ten-year-old Westphalian bred horse by Cristallo.

It is only the pair’s third competition together here in Aachen. However, they have known each other for quite a while longer – the grey horse belongs to the Swedish family, Tovek, whose daughter Evelina has been training with Henrik von Eckermann for just over a year. When Henrik von Eckermann rode Castello for the first time at international level, he immediately qualified for the Rolex Grand Prix of Aachen by winning the Grand Prix at the CSIO5* in Sopot, Poland. He knew straight away: If he was going to have a chance here at the CHIO it would be with Castello. So, he asked the Tovek family, if they would lend him the super talented horse one more time. And now he is here, with the first big victory in his pocket. For him it was no surprise: “He suits this stadium with his fantastic jumping scope and huge canter stride perfectly!” That was also what helped him in today’s jump-off: “I can turn very tight and know that my horse could jump over a mighty oxer at a halt if needs be.” As such the clock stopped at 47.30 seconds for the pair.

It was too fast for the winner of the 2017 World Cup, McLain Ward (USA) and HH Azur, the Thunder van de Zuuthoeve daughter, who already carried her rider to team silver at the Olympic Games in Rio de Janeiro in 2016. She has the same jumping abilities as Castello, but today she took 0.26 seconds longer to reach the finish line, which meant second place.

Third place went to an elated Marcus Ehning with his “favourite horse”, which is how he refers to the 13-year-old Westphalian-bred stallion, Funky Fred. Marcus Ehning competed at the CHIO for the first time ever with the dam of the colourful chestnut, the mare Panama. A few years later, he competed here with For Pleasure, the father of Funky Fred. And now this own-bred son is celebrating success, this time it was rang three in the Turkish Airlines Prize of Europe. What was important for Ehning: “Two clear rounds give one a good feeling for the coming days.”

The man who finished fourth here at the Soers today not only had a good feeling, he is probably flying high now: the Irish show-jumper Darragh Kenny. After winning the Prize of Handwerk just a few hours ago, he explained after walking the course for the Turkish Airlines Prize of Europe: “The course is tough! To survive here you need a super horse!” At the time he could only guess that this was true of his ten-year-old Swedish-bred, Westbrook. He had namely never ridden the gelding at a show before today. Westbrook provided his rider with the answer in the form of the fastest four-fault round in the jump-off.

There were two falls in the jump-off. The rider from the USA, Laura Kraut and her horse Confu both sustained no injuries. The Brazilian show-jumper, Yuri Mansur and the Hanoverian-bred stallion, Vitiki, fell at the DHL oxer. The stallion was taken to the clinic of the CHIO Aachen and treated. He has sustained an injury to his pastern and was transferred to a special clinic for further treatment. 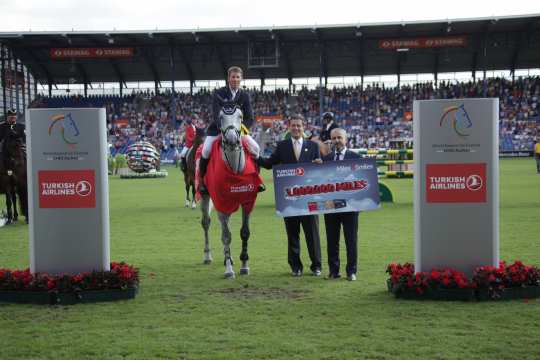