For the Brazilian rider, Felipe Amaral, it was “an incredible feeling” being able to compete at the CHIO Aachen. He couldn’t have wished for a better start than today in the Prize of Handwerk for his premiere at the Soers.

The Brazilian rider, Felipe Amaral, had chosen the Prize of Handwerk for his debut at the CHIO Aachen and had saddled a horse with an apt name for the purpose: Germanico T. The 14-year-old stallion is a horse that “he really likes”, explained the 30-year-old. And it was no surprise for him that Germanico knocked around five seconds off the time of his colleagues in the 1.45 metre class against the clock. “He jumped clear in both rounds of the Nations Cup in Geesteren.” He didn’t pick up any faults today either. And his time of 57.74 seconds was simply unbeatable. 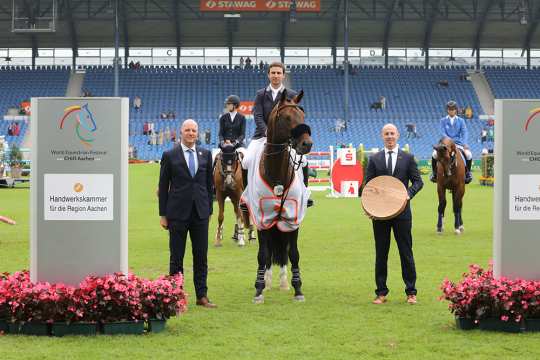