In the first competition of the Sparkassen-Youngsters-Cup 2018, Daniel Deußer with Killer Queen was a nose ahead of his work and stable colleague from Stephex Stables, Lorenzo de Luca (ITA), the Italian show-jumper came second with Evita van’t Zoggehof. In the Final, Luca turned the tables round.

Eleven pairs reached the jump-off in the Sparkassen-Youngsters-Cup, ten of them jumped clear in this round too. Amid a full house, the best riders in the world delivered a thrilling final till the last minute with the crème de la crème of aspiring four-legged youngsters. The Italian rider Lorenzo de Luca and the eight-year-old Belgian Sporting Horse mare, Evita van’t Zoggehof by Golden Hawk reached the finish line in a time 39.21 seconds, which seemed to be an unbeatable result. But the fiercest rival from his own yard, Daniel Deußer was still to go with the BWP-bred mare, Killer Queen. And they really gave their best! But in the end it didn’t suffice: 39.77 seconds, which meant second place. After de Luca, two further pairs succeeded in cracking the magic 40-second mark in the jump-off: Christian Ahlmann with Cornwall and Martin Fuchs (SUI) with Karel VDB. But they couldn’t quite catch de Luca either. Ahlmann came third with the Westphalian-bred grey stallion in a time of 39.90, Fuchs finished fourth (39.97).

Lorenzo de Luca reported later that it had been a very difficult course for the young horses. But that it also proved the quality of the young horses in the way they coped with a water ditch and the huge arena. Lorenzo de Luca has been riding Evita since the beginning of 2018 and he thinks very highly of her. He definitely wants to keep her. “Today’s victory was especially nice for everyone involved because the breeder saw the mare in action for the first time.”

Talking about breeders – both Evita and her stable mate, Killer Queen, come from a good line. Evita’s grand dam, the Selle Français mare, Fragrance de Chalus by Jalisco, for instance also produced the stallion Mylord Carthago, who is also well-known in Aachen (Pénélope Leprevost/FRA) as well diverse other international sporting horses and graded stallions. Killer Queen’s dam, Derly Chin de Muze, competed at the Olympic Games in London with the Canadian show-jumper, Eric Lamaze, in 2012. And not only these two horses have famous ancestors. Christian Ahlmann’s stallion, Cornwall, is a son of Marcus Ehning’s Championship horse, Cornado NRW. 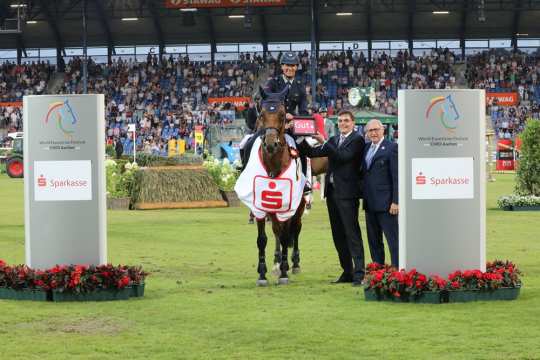 The winner is congratulated by Norbert Laufs, chairman of Sparkasse Aachen, and ALRV Supervisory Board member Wolfgang "Tim" Hammer.