There was a change of positions in the Grand Prix Freestyle of the U25 dressage riders at the CHIO Aachen 2016. In the Grand Prix, the Belgian rider Laurence Roos (22) and her 11-year-old gelding, Fil Rouge (a strange name considering the fact that the horse is a dark bay and not a chestnut) came second. However, in the Freestyle she worked her way to the front of the field. She was awarded a score of 74.550 percent by the judges. The winner of the Grand Prix, Juan Matute Guimon from Spain, finished second with Quantico Ymas on a score of 73.60 percent.

The Swedish rider, Lina Dolk, made a huge leap forwards with Biggles. After coming 14th in the Grand Prix, she ranked third today (73.20). The already 18-year-old gelding is well-known in dressage circles. Under Kristian von Krusenstierna he regularly took part in World Cup qualifications for Sweden and at other major international shows, before taking on the role of schoolmaster for Lina Dolk.

Florine Kienbaum, who came third in the Grand Prix, was the best German rider with Doktor Schiwago in fourth place (71.875). Like Juan Matute Guimon, she too took part in the first E25 European Championships in Hagen. She won team gold for Germany as well as silver in the individual classification and the Freestyle. Juan Matute Guimon won bronze in the individual classification. 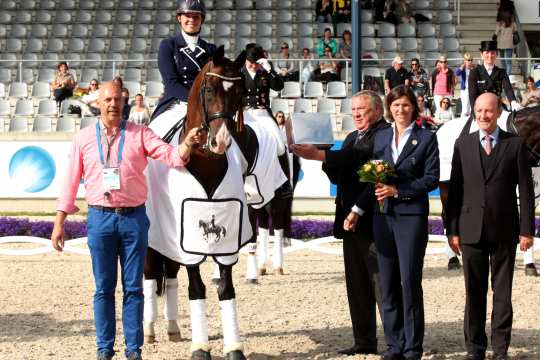