All good things come in threes

“Simply do a few nice rounds.” That was Richard Vogel’s plan for the remaining classes at the Aachen International Jumping after his second victory. After a further triumph, his plan definitely seems to have succeeded.

“Luck was always on my side at the right moment,” the 23-year-old stated modestly after the third lap of honour he was able to head. But what he demonstrated in the ring has precious little to do with luck. In an experienced manner and with a great deal of deliberation, he steered “Lesson Peak” through the final of the Medium Tour at lightning speed in a time of 58.44 seconds. And thus left big names like Kevin Staut, Ludger Beerbaum, Michael Whitaker or Scott Brash trailing behind him again.

Laura Klaphake and “Camalita” were close at Vogel’s heels and finished in second place. The pair took 59.94 to complete the course. The Brazilian show-jumper Marlon Modolo Zanotelli came third with “Emmerton” on a time of 60.12 seconds. 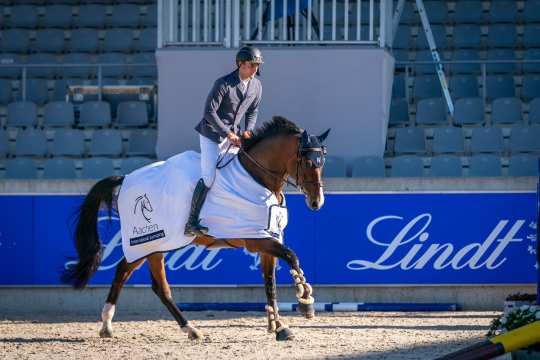