The first winner in the dressage arena of the Deutsche Bank Stadium in 2021 is Helen Langehanenberg. In the Prize of VUV-Vereinigte Unternehmerverbände she presented an Aachen debutante.

With a total score of 76.324 percent after a wonderfully harmonious test, Helen Langehanenberg and Schöne Scarlett secured themselves the victory in the Prize of VUV-Vereinigte Unternehmerverbände, the Prix St. Georges, which is the first part of the Small Tour in the dressage arena of the Deutsche Bank Stadium. Frederic Wandres galloped into second place with Quizmaster (75.059), followed by the Dutch rider, Emmelie Scholtens, with her dark bay KWPN-bred horse, Indian Rock (74.50).

Beautiful with a heart of gold and then also bestowed with the talent for top level sport – Helen Langehanenberg’s eight-year-old Hanoverian-bred mare, Schöne Scarlett, really has all assets one could hope for in a horse. It was not only the first time the Scolari daughter has competed in Aachen, she also hasn’t taken part in a show for five months. “We namely spent that time practicing Grand Prix exercises,” stated Helen Langehanenberg. These, weren’t demanded today though. Today, the Prix St. Georges exercises were on the agenda. But swapping between the two hadn’t proved difficult for Scarlett. And her first performance in the Deutsche Bank Stadium? Helen Langehanenberg: “She was totally unimpressed. In terms of her character, she is simply a dream!” And that doesn’t just apply for her character as the result demonstrates.

Helen Langehanenberg can now lean back and relax. In contrast to past years, she has no horse for the Big Tour with her in Aachen. But Frederic Wandres, who came second, certainly has: He is riding for the German team in the Nations Cup at the CHIO Aachen for the first time with his top horse, Duke of Britain.

We will also see the Dutch rider, Emmelie Scholtens, who ranked third, in the Grand Prix again too. Incidentally, the 35-year-old is expecting her first child, which is so to say riding along with her. Practice makes perfect, who knows perhaps we might see her offspring performing in the Deutsche Bank Stadium one day! 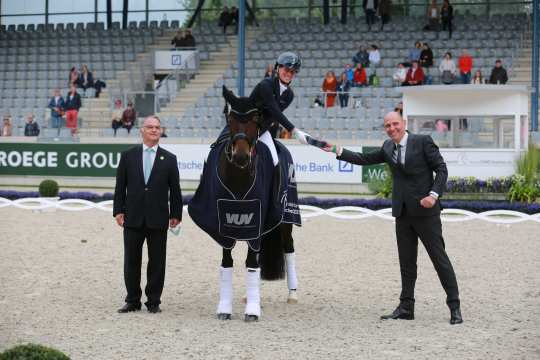