Aachen has been the venue for the Final of Germany’s U25 Trophy of the German Top Equestrian Sport Foundation, Prize of Family Müter, since 2015. Today, the qualifier for the grand finale on Soers Sunday was staged.

Robin Naeve travelled to Aachen from Schleswig-Holstein. Since he will turn 25 at the end of the year this is his last chance to win Germany’s U25 Trophy. His opening performance was very promising for the son of the Nations Cup rider, Jörg Naeve. He won the qualifier for tomorrow’s final with his 11-year-old Casall-daughter, Casalia R, like speedy Gonzalez. With a clear round in the time of 71,98 seconds, the mare demonstrated what her rider meant when he said “she is small, but has a huge heart”. The pair crossed the finish line just over four seconds faster than their fellow competitors. Second place went to Emilia Löser on her Oldenburg-bred Lordanos-son, Lesodero (76.03), followed by Mylen Kruse with Christa.

Today’s penalties and time class comprised of one round. In the Final tomorrow, there will be a jump-off to decide the victory. 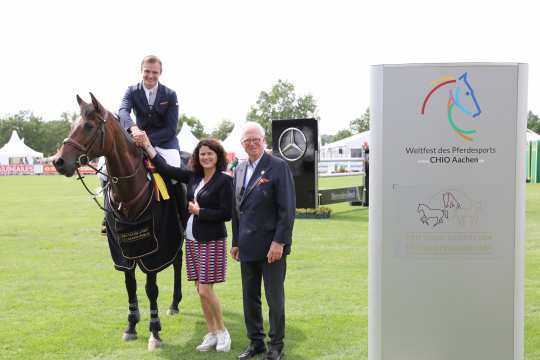