As a replacement for the Youth Olympic Games, the FEI Youth Equestrian Games are being staged during the CHIO Aachen 2022 (June 24th to July 3rd, 2022). 30 young talents from 30 nations will be travelling to Aachen to compete against the best of the best.

Being able to ride on the Holy Grass at the Aachen Soers, rubbing shoulders with the world elite of their sport: This dream is going to be fulfilled for the participants of the FEI Youth Equestrian Games, which are being staged in the scope of the CHIO Aachen 2022. But not only the young athletes aged between 14 and 18 years, but also the organisers of the CHIO Aachen are looking forward to these classes with great anticipation. “The competitions fit in perfectly with our youth concept and our commitment to aspiring athletes,” stated Frank Kemperman, CHIO Aachen Show Director. The Aachen-Laurensberger Rennverein e.V. (ALRV) has been continually extending its commitment to the youth for years. In addition to the “Aachen Youngstars” in the winter and the integration of U25 and U21 competitions into the programme of the CHIO Aachen this particularly also includes the valuable offers of the CHIO Aachen CAMPUS, which further accentuate ALRV’s focus on the promotion of talented, young athletes. Staging the FEI Youth Equestrian Games is now a further major step in this direction.

Originally the competition was part of the Summer Youth Olympic Games in Dakar (Senegal), which were postponed to 2026 due to the Corona pandemic. Now 30 young talents from 30 nations will be travelling to Aachen to find the best of the best. The list of the qualified nations ranges from Egypt and Guatemala, to New Zealand, through to Uzbekistan. And Germany is also sending a candidate to this event for the first time. Who this will be, won’t be revealed until around four weeks before the start of the event. But one thing is clear already: The young athletes will experience the legendary CHIO Aachen atmosphere in the Main Stadium.

The young talents will be competing on the Holy Grass at the Aachen Soers both in an individual class and in a cross-continental competition. The event kicks off on Wednesday, June 29th, with the first round of the team competition, where a team comprising of five athletes will compete per continent (Africa, North and South America, Asia, Australia and Europe). The decisive second round will be held on the Thursday (June 30th). After a one-day break, when the participants will attend a training course of the FEI “Education Programme” covering the themes mental fitness, competition preparation and safe sport, the individual classification will be contested on the Saturday (July 2nd). The festive highlight will be participating in the Farewell of the Nations ceremony on July 3rd, when the aspiring talents will be celebrated by the crowd alongside the participants of the CHIO Aachen. 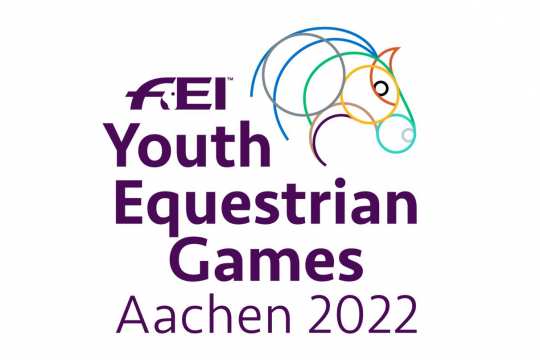 Members vote Frank Kemperman onto the Supervisory BoardCourse jumpers challenge Olympic gold medallists"Welcome to the Festival": Opening Ceremony with horses, artists, street art and superstar Wincent WeissDorothee Schneider raves about ShowtimeIn mourning for Arno Gego“Clear the ring” for the show of the year - “Horse & Symphony” at the CHIO Aachen 2022Rare insightsCHIO Aachen CAMPUS 2022 – the first dates are online!Martin Fuchs: “Having one’s name on the winner’s board in Aachen would be fantastic!”

The Witnesses of CHIO