History is written in Aachen and heroes are made! Just like this evening during the Mercedes-Benz Nation’s Cup at the CHIO Aachen 2017, when Germany succeeded in claiming the victory in this traditional competition for the second time in succession.

And in what style! Otto Becker’s team didn’t pick up a single fault. Today, Becker had placed his bets on three experienced pairs – Marcus Ehning with Pret a Tout, Philipp Weishaupt and LB Convall, Marco Kutscher with Clenur – and one youngster: Maurice Tebbel, 23 years old. His horse: Chacco‘s Son, also only ten-years-young. On this evening, the pair were heralded as the heroes of Aachen. Double clear in their first Nations’ Cup appearance at the Soers! They didn’t even come anywhere near to touching a pole. It was as if Chacco‘s Son, knew what was at stake. The national coach’s strategy paid off. “It is simply incredible,” he said delighted. “I am so proud of the team! Winning here in Aachen, is simply something special. And when Maurice delivered his second clear round, I almost had to wipe a tear away.” It was an emotional evening in Aachen.

Particularly for Maurice Tebbel too. He already threw his arms up in the air after the first round and then around Chacco‘s Son’s neck. “Of course, one dreams about it happening, but when things really go that well, it is simply indescribable.” Maurice evidently couldn’t really believe what had just happened. Especially since he only had one thought while walking the course: “High!” One is certainly pleased to have a horse like Chacco‘s Son in such a situation, he said with respect for his four-legged partner. The two of them know each other inside out. The stallion already came to Tebbels as a foal. Maurice presented him at the stallion grading himself and gradually introduced him to the top sport after riding him in young horse competitions. They already took part in the big tour in Aachen last year and immediately claimed second place in the Prize of North Rhine-Westphalia Now he was sat on the podium in the press conference of the Mercedes-Benz Nations’ Cup, sat next to his role mode Marcus Ehning. As a winner. He couldn’t hope for more. Except for perhaps on Sunday, when he will do his best to win the Rolex Grand Prix.

Marcus Ehning was no less overjoyed about his double clear with Pret a Tout. But he is already familiar with the situation, namely in 2016 it was exactly the same. Well, not quite: “It is a shame Ludger (Beerbaum, editor’s note.) is no longer there! Because now I am the oldest one on the team!”

“It was a “perfect day all-round” for Philipp Weishaupt too. It was namely also his birthday. His comment: “This victory is the best birthday present ever!” Apart from that, I am sure 40,000 people have never sung “Happy Birthday” for him before as they did today, after he had jumped clear for the second time and thus secured the victory for Germany. Moreover, his fantastic L.B. Convall looked like he could definitely repeat last year’s victory in the Rolex Grand Prix of Aachen.

The only rider things didn’t go well for was Marco Kutscher with Clenur. In addition to picking up faults in the first round, his horse also refused at the water ditch. Kutscher took it with humour: “I have thank my team colleagues today, my job today was to make the whole thing a little more exciting!”

Two teams shared second place, namely the USA and Switzerland, both on a total score of eight faults. After several teams excelled with clear rounds in the first round, the poles fell frequently in the second round. Several horses seem to have tired. Whereby the riders were of the unanimous opinion that Frank Rothenberger’s course was tricky, but fair.

Switzerland was represented by Werner Muff with Daimler (0/0), Martin Fuchs with Clooney (4/8), Nadja Peter Steiner with Saura de Fondcombe (0/8) and Steve Guerdat with Hannah (0/0). Their Chef d’Equipe Andy Kistler emphasised how proud he is of his team, especially of the lady in the team. It was namely her first appearance ever in Aachen. “Of course, it would have been super to win. But coming second here is fantastic too!” stated Kistler.

Robert Ridland, Chef d’Equipe of the USA, thought so too. He had nominated Kent Farrington with Gazelle (8/0), Elizabeth Madden with Coach (8/8), Laura Kraut with Zeremonie (0/0) and McLain Ward with HH Azur (0/0) for the team. His conclusion corroborated what 40,000 spectators took home with them: “What we saw here today was sport at the very highest level. It doesn’t get any better than that. And it is an honour for us to be able to compete here!”

There was a small incident during the competition when the gelding Titus, Guy William’s horse, stumbled on landing after an obstacle and had to be taken from the arena in an ambulance. After being inspected immediately in the clinic on the CHIO grounds, it was announced that he had suffered a sprained tendon. After a corresponding break he should be fit and ready to compete again. 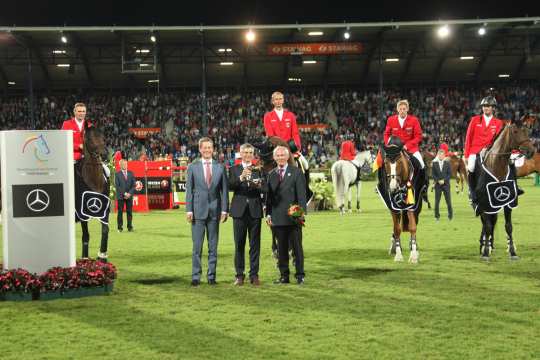