Saturday is Marathon day for the four-in-hand drivers in the Prize of schwartz GmbH. As in the previous year, the Dutch driver Koos de Ronde steered his horses through the solid obstacles in the fastest time. But there was also reason for joy from a German point of view.

The Dutch are in the driving competitions what the Germans are in the dressage at the CHIO: Virtually impossible to beat. The 35,000 visitors on the meadows of the Soers at the CHIO Aachen 2019 witnessed top sport today. Because not only the cross-country course of the events was extremely tough, the Marathon of the Prize of schwartz GmbH was also very demanding. The driver from the Netherlands, Koos de Ronde, sped into the lead ahead of the rest of the field for the second time. Since his fellow countryman, Ijsbrand Chardon, finished directly behind him in second place, the Oranje team is currently in the lead in the DHL Nations Cup classification with an interim result of 326.390 minus points, which means it is practically impossible to catch them up, even though their team member, Ijsbrand Chardon’s son Bram, was disqualified in the Marathon after one of his horses fell. Fortunately neither the horse nor the driver were hurt.

Boyd Exell (AUS) came third behind the two Dutchmen and was thus able to defend his lead in the individual classification, the Prize of Family Richard Talbot.

Germany’s drivers on the advance

The German drivers are bound to be in good spirits this evening, after lying in fourth place after the dressage the team was able to move up to third place after super performances in the Marathon competition today. Georg von Stein, Anna Sandmann, Mareike Harm and Michael Brauchle came sixth, seventh, eighth and ninth respectively in the Prize of schwartz GmbH. Whereby only the scores of Georg von Stein, Harm and Brauchle count for the team result.

The two best German drivers in the individual classification, the Prize of Family Richard Talbot are currently Anna Sandmann in seventh place and Mareike Harm in eighth place. The German national coach, Karl-Heinz Geiger’s summary after the Marathon: “All three team drivers under the top ten – that is super and particularly our two female drivers did an excellent job!” 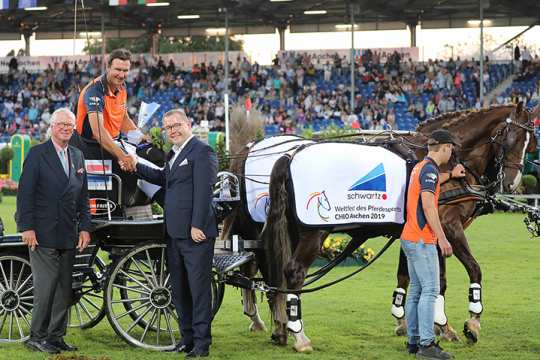