The Dutch four-in-hand drivers are unbeatable at the CHIO Aachen 2021!

The Dutch four-in-hand drivers have won the Boehringer Ingelheim Nations Cup no less than 13 times in succession. They dominated in all three phases – in the dressage, Marathon and obstacle driving. They delivered the best team result in each competition. The team comprising of Ijsbrand and Bram Chardon as well as Koos de Ronde snatched the title today with a score of 315.980 points, ahead of Belgium (346.440) and Germany (352.520).

If it doesn’t happen to be Boyd Exell, who heads the field in the Prize of the Family Richard Talbot, the Dutch old veteran driver, Ijsbrand Chardon, is always good for a victory. And the same was true this year. With a score of 164 minus points, he asserted himself against his team colleague, Koos de Ronde, who had collected 167.17 points. The defending title holder, Boyd Exell, who had set his sights on his tenth victory in Aachen, ultimately finished third on a score of 167.96 minus points. The best German driver was Mareike Harm and her team, who finished fourth.

Ijsbrand Chardon won the Prize of the Family Richard Talbot for the last time in 2018, so one can’t exactly say it was a surprise victory. Whereby Chardon himself stated: “It is a fantastic feeling hearing the Dutch national anthem here in Aachen! But I wasn’t expecting it.“ Things always seem to happen when you expect them least.

The obstacle driving competition went to the Czech Republic today. Jiri Nesvacil Jr. was the fastest in between the cones, ahead of Glenn Geerts from Belgium and the Dutch driver, Koos de Ronde. 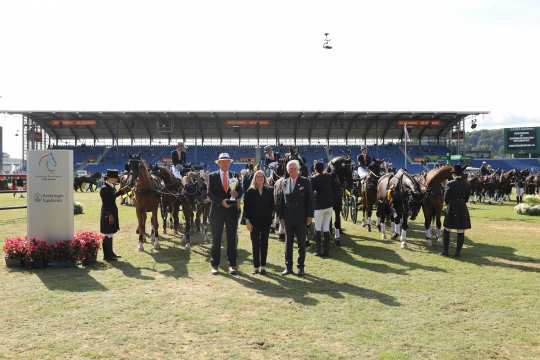