The Dutch rider, Dinja van Liere, wasn’t able to participate at the Olympic Games with her horse Hermes due to a technicality. Today’s victory in the Prize of Family Tesch, the Grand Prix of the CDIO5* Tour, has more than compensated her for this disappointment.


“That is a dream come true. Simply amazing!” the Dutch dressage rider, Dinja van Liere, said after her victory in the Prize of Family Tesch in the saddle of her Easy Game son, Hermes. It was the first time she is competing in the Big Tour in the Deutsche Bank Stadium, the first time on the Dutch team in Aachen and then to walk off with the victory straight away. “Is that actually allowed the first time round?” joked her colleague, Patrik Kittel, who finished in third place. Whether allowed or not – van Liere and Hermes did it. The judges awarded the pair 78.022 percent. That is the best international result that the just nine-year-old KWPN stallion, which van Liere has trained herself, has ever achieved by far.

This victory is a big consolation for Dinja van Liere. She was nominated for the Olympic Games in Tokyo. However, Hermes was mistakenly registered under the FEI as being German-owned. Whereby the horses have to be registered with a proprietor from the nation they are competing for by a certain date. Which put an end to Dinja’s Olympic dream. “I think we demonstrated today that we deserved a place on the team!”

Incidentally, the pair have a rather unconventional trainer, the Western coach Rieky Young, who also taught the dressage Olympic gold medallist, Anky van Grunsven, the basics of Western riding. Van Liere: “The special thing about her, is that she really has feeling for horses. It doesn’t matter whether one rides dressage, jumping or Western.”

Second place with a score of 76.717 percent, went to the British rider, Charlotte Fry with her KWPN gelding, Dark Legend by Zucchero. The 25-year-old, who has been living with the von Olst family in the Netherlands for years, has had an incredible year – team bronze at the Olympic Games in Tokyo, team silver at the European Championships in Hagen, gold at the World Championships of the Young Dressage Horses in Verden. “That is really an important year in my career. Being placed in Aachen is the icing on the class,” she said overjoyed, especially “that we came here and showed what we can do.”

Third place went to an Aachen Soers old hand, who nevertheless presented a new horse today: The Swedish rider, Patrik Kittel, on the former three-time World Champion of the Young Dressage Horses, Fiontini. Aachen the only the third show for the pair and finishing on a score of 76.261 percent their best result at international level to-date. Fiontini belongs to Andreas Helgstrand, who due to his business commitments has no time to do justice to the talented mare, so he asked Kittel if he wanted to ride her.

It has been a long time since that there hasn’t been a German under the top three in the Prize of Family Tesch. The German national coach, Monica Theodorescu, had nominated two Aachen newcomers this time (Frederic Wandres with Duke of Britain and Carina Scholz with Tarantino) as well as two experienced riders with new horses (Isabell Werth with DSP Quantaz and Jessica von Bredow-Werndl with Ferdinand BB). Isabell Werth and Quantaz came fourth on a score of 76.130 percent, followed by Wandres and Duke of Britain (75.848) and Bredow-Werndl with Ferdinand (74.348). Carina Scholz and Tarantino finished eighth. That means the German team holds a clear lead of 15 points after the first competition in the Lambertz Nations Cup. 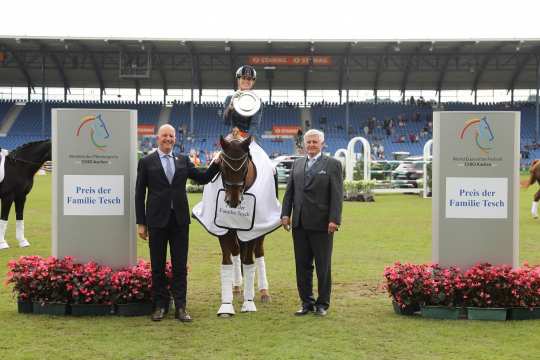