A talent show was on the agenda at the CHIO Aachen today – first of all in the U25 competition, then the four-legged athletes demonstrated their talent in the Sparkassen-Youngsters-Cup. The victory went to the Irish rider Darragh Kenny with a horse that he thinks very highly of.

16 seven and 25 eight-year-old aspiring top jumping horses competed in the first stage of the Sparkassen-Youngsters-Cup. The seven-year-olds jump over 1.40 metre obstacles, the eight-year-olds over up to 1.45-metre-high fences.

The fastest pair was Darragh Kenny and the eight-year-old Holstein-bred Casall son, Crispo R, who jumped clear in 71 seconds. It was no coincidence as Kenny stated: “He really is a very talented horse! One that has all the potential for five-star Grand Prix,” the Irish rider raved about the gelding, who he has been riding since April for the horse’s American owner.

Second place went to the German Champion, Tobias Meyer, who had saddled a further Holstein-bred horse, the Diamant de Semilly daughter, Fassida VA-H (72.27 seconds). Aachen is only the third show the pair have competed at together and the fifth placing under the top three.

The just 21-year-old Philipp Schulze Topphoff was delighted at finishing third with the Westphalian-bred mare Carla by Comme il faut. Philipp Schulze Topphoff, European Champion of the Young Riders in 2019, had a fantastic day at the CHIO Aachen today, after jumping to victory in the qualification for Germany’s U25 Jumping Cup shortly beforehand. In the course of this series for aspiring young riders, he has already had the opportunity to ride in Aachen twice. But this year is the first time that he is competing in the Big Tour. “That is something totally different,” he said grinning from ear to ear, before riding into the stadium for the prize-giving ceremony alongside Olympic gold medallists, the Rolex Grand Slam winner Scott Brash and further champions. 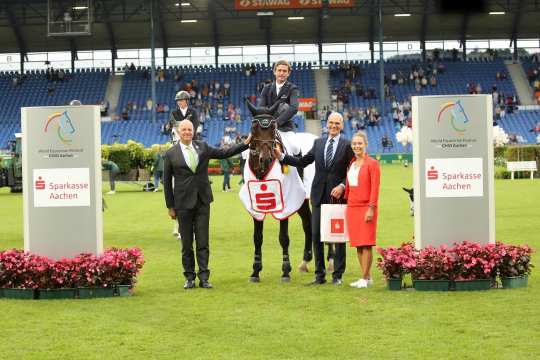