Thunderous applause. Standing Ovations. Thousands of handkerchiefs. And a few tears in the eyes of all involved. For the dressage queen Isabell Werth and Bella Rose their joint sporting journey came to an end at the showgrounds of the Soers on Friday evening.

Don Johnson, Satchmo and the other members of Werth’s oldie gang are now waiting for Bella Rose. The farewell was so typical for Aachen. “Muss I den” rang out of the loudspeakers and the 6,000 spectators waving goodbye with their white handkerchiefs in the Deutsche Bank Stadium. “A dignified farewell for Bella – who radiated this dignity all her life. “It was fantastic,” commented a visibly moved Isabell Werth.

It was to be the last dance. And it was the dance of a horse that presented herself in top form to the crowd in Aachen, she would have definitely still been able to secure a good ranking in the Deutsche Bank Prize. At the start of the farewell gala that was staged especially for the 18-year-old mare, Isabell Werth presented her freestyle routine with her “soulmate” horse to the well-known sounds and elements of Beethoven’s Ninth Symphony, played live by the CHIO Project Choir under the direction of Tanja Raich. The crowd celebrated the performance with frenetic jubilation and standing ovations in the sold-out Deutsche Bank Stadium.

Isabell Werth admitted that she had been nervous. And ultimately happy that her Bella Rose had presented herself to the crowd in Aachen in top shape. And she stood in the floodlights of the Deutsche Bank Stadium with her ears pricked forward, framed by the people who have accompanied her throughout her life: Her owner, Madeleine Winter-Schulze talked about many successful riders that will be remembered eternally. The national coaches Monica Theodorescu and Jonny Hilberath as well as the Chef d’Equipe Roeser were also present together with the breeders Wilhelm and Hermann Strunk, as well as Werth’s entire team from Rheinberg, first and foremost Bella’s groom, Steffi Wiegard. Stefanie Peters, President of the Aachen-Laurensberger Rennverein (ALRV) and Show Director, Frank Kemperman, who handed over a Bella Rose NFT to Isabell Werth, wished Bella all the best for her retirement.

The final lap of honour by Bella Rose was accompanied by the performance of dancers under the direction of Marga Render to the melody “Bella Ciao”– and in customary Aachen style to the sounds of “Muss I denn“ and a sea of handkerchiefs. Bella Rose can now look forward to the meadows at her home in Rheinberg and the rest of the oldies gang comprising of Satchmo, Don Johnson and co. And her rider is already making further plans. “I very much hope we will be able to enthuse the crowds in the future with a new horse,” she promised the crowd in Aachen. “The way you have supported and celebrated Bella and myself, that is almost a moral obligation.” 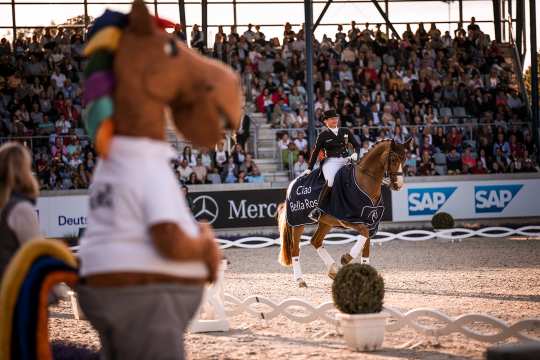