The Wednesday at the World Equestrian Festival, the CHIO Aachen, kicked off with a victory for the Irish show-jumper, Cian O’Connor (36) in the Prize of Handwerk, a jumping competition that is won by the rider, who jumps clear in the fastest time. Cian O’Connor had borrowed the mare, Be Gentle, for this competition, she actually belongs to his US-American riding student, Lillie Keenan (19). Under the experienced, Irish rider, the 10-year-old Dutch-bred mare was the only horse to reach the finish line clear in a time of under 70 seconds, ahead of Cassio Rivetti (UKR) with Beau Limit and Michael Whitaker (GBR) with Hot Property.

As on the day before, the German youngsters picked up a few rosettes for the host nation. Notably, the 25-year-old Marcel Marschall this time, who finished seventh with Chacco Gold, followed by Laura Klaphake (22) with Catch me if you can.

The prize-giving ceremony was conducted by the Chief Executive of the Aachen Chamber of Trade, Peter Deckers. Carl Meulenbergh, President of the Aachen-Laurensberger Rennverein e.V. (ALRV), took the opportunity to show his gratitude for 65 years of “good and trusting cooperation” with the Chamber of Trade by presenting a small gift. “We are delighted for this opportunity to express our gratitude!”

Incidentally, Laura Klaphake, who came eighth is the only female German rider, who has been selected for the “Young Riders Academy”, an international talent promoting programme initiated by the European Equestrian Federation (EEF), which is supported by the CHIO partner Rolex and the International Show Jumping Club. 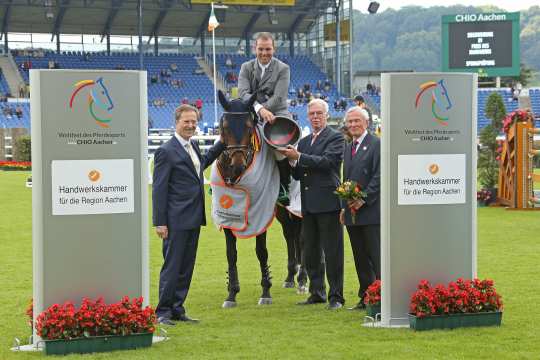